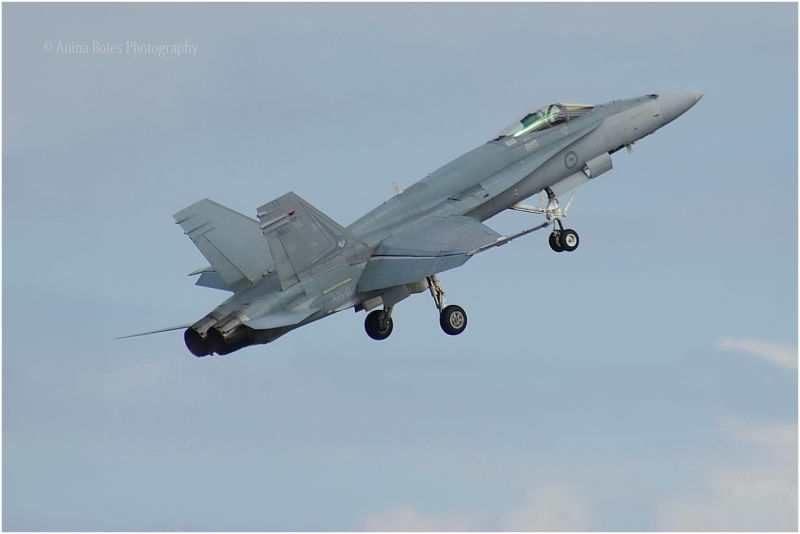 Previous Next
← previous day next day →

The F/A-18 Hornet is a supersonic, all-weather carrier-capable multirole fighter jet, designed to attack both ground and aerial targets. It is highly maneuverable and capable of extremely tight turns over a large range of speeds.

Thanks for stopping by.

All comments, critiques, suggestions and tips are welcome and appreciated.

I may not always have time to thank you, but comments are always read and appreciated, and I will try and visit your site and leave a comment. I'll do my best to answer every question and address specific comments.

Anina I am amazed at the detail and perfect sharpness you have managed to achieve in these difficult conditions! Great work for sure!!!!

Perfect capture of this piece of machinery in motion! Well done Anina!!

Its a wonder how u managed to get a well focused, clean, clear shot every time. These things r not the slowest things on earth. Well done.

Powerful diagonal which has drawn in the sky with this powerful plane. Congratulations on your good pulse and reflexes! A penalty in the image that lasts a moment ... well caught by a good photographer! Best regards... Adela

Look at that! Stunning.

SOUL AFLAME from The bosom of Mother Nature, United Kingdom

It's wingtip is fused to the front wheel undercarriage.... silly me! ha ha
Another terrific shot, Anina.

Terrific shot... Just like a toy. Have a nice day Anina

I am amazed at all the fantastic shots you got of the planes at this airshow, Brilliant work

Good evening, Anina,
Your representations will be more interesting every day. It is excellent and color, brilliant and clear. Wonderful evening and thank you for your nice comment. Dear greetings Christel

Gosh your detail is superb as always, I can see into the cockpit. Well done.

We have a militairy airport here..and sometimes they have "open"days
and show things like this..hmm mabey I should go next time:)
But I doubt if I can catch the planes as beoutiful as you do!

I am amazed at how well your images turned out. I have been to quite a few air shows and I never seem to get the quality you did. I have really been enjoying these. Yesterday's post was outstanding also, The framing with the spectators in the foreground was perfect.

A true lesson of aeronautics. One does not know these planes at home, clearness and the beauty of your photographs inserts me in a world of dream .....

Another one so close it looks like you could touch it! Spectacular photography!

A very unique shot, don't get to see the wheels on a airplane in flight often ! :) Excellent details..

Nice photographs...Thank you for these pictures.

Great shot! We have Hornets too in Finnish air force. ;D